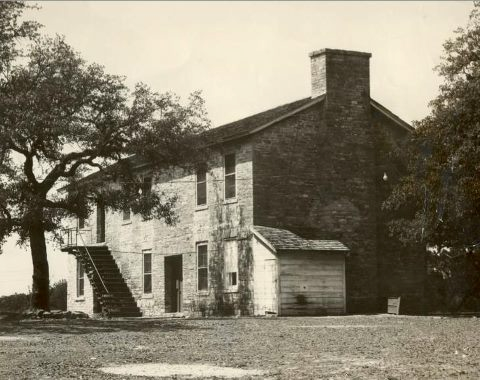 One of the truly memorable things about Onion Creek Lodge are her buildings, the Brothers who designed and built these physical halls that have served as meeting places, and as physical cement for strong feelings of Brotherhood at the Lodge.

Onion Creek Lodge was born as an idea of Brothers working on the Log Cabin Lodge in 1857.  Masons have always been strong supporters of public schools.  When the community school, called the Red Cedar School, burned down sometime in the mid 1850’s, groups of Masonic brothers gathered to help rebuild it.  As these brothers worked together, they began to discuss the problem of getting to Lodge meetings in Austin – which was then six miles north, and involved crossing over what was sometimes a treacherous Colorado River.  They petitioned the Grand Lodge of Texas and were chartered a Lodge in 1858. 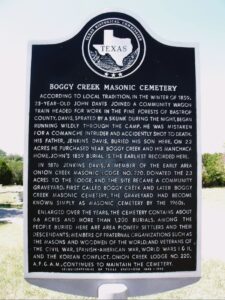 The new Onion Creek Lodge met in the Red Cedar School House which later became Union School House at the intersection of Boggy (sometimes called Onion) Creek and the Post Road near Old Middlebuster or San Antonio Road (now Circle S Road).  To the East stretched the trail to Bluff Springs which wound over the Pleasant Hill on out toward Lockhart.

These Brothers wanted to build a new Lodge House and School of stone, and in 1860 land at the Pleasant Hill was donated by Bros. Jenkins Davis and John Wilson for an original stone lodge to be built in 1860.  The stone was quarried in Oak Hill (this quarry was used later as a source for the Texas Capitol Bldg. in 1883).  Six brothers loaned moneys totaling $659 and Yankee Mark Gibson began to lay the stone until the Civil War pushed him to leave for the North; the building was finished by a Mr. Broadway.  On Nov. 16 1861, the Lodge moved into the new building for its first Stated Meeting.  This original Lodge was 21 feet wide and 40 feet long, and was situated on 1.80 Acres in Wm. Cannon’s League near Neil Branch Creek.  The Union School House changed name to Pleasant Hill School and the Mason’s assumed ownership of the entire building in 1869.  From 1857 to 1935 the building was shared with Pleasant Hill School, the oldest free public school in Texas.

As more and more boys, and particularly girls, sought an education, the Brothers built a lodge addition to the West end of the building in 1908.  This added space cost about $770.  A new large exterior staircase was added that same year on the South side of the Lodge.   Masonry has always encouraged attention to religion, and the Brothers granted use of the building on Sundays in rotation:  1st Sunday to the Methodists, 2nd to the Old School Presbyterian, 3rd to the Cumberland Presbyterians, 4th to the Baptists, and the 5th as granted by WM.

Various developments came in the following years:  In June 1941, a group was appointed to “drive fleas” out of the Lodge banquet hall.  The early 1920’s found the school visited by the first automobile seen in these parts.  The students turned out to see the car and get their pictures made.  In May of 1944, rock curbs were built around the great oaks in the yard.  That same year water pipes from Bro Wilson’s place next door gave running water to replace the cistern.   The next year, the Lodge installed indoor toilets, and in 1949 city waterlines reached the Lodge.

Texas Power and Light brought electricity in 1936, thanks to the New Deal.  The meter cost $10 and the minimum charge was $2.00 per month.  In 1953, Bro Monroe F. Ebner made and donated a luminous sign for the street entrance.

By the 1950’s, the Brothers wanted to build a new stone lodge and Sept. 24th 1954 heralded the groundbreaking for the building.  WM James Boyd dug the first shovel and by Feb. 17, 1955, the Lodge Cornerstone was set in place by MW GM George Moffett.  The first plans originally called for a single story addition reaching West from Old Lodge but it was ultimately decided to go with two stories.  Brothers designed and built the New Stone Lodge Hall, keeping the projected cost of $45 thousand down to about $14,000 by the time the New Lodge was finished.

The Brothers received dispensation from the Grand Lodge  of Texas to move into the New Lodge Room on May 17, 1955.   The Lodge Room was upstairs, with a new dining hall downstairs.  The old school room would contain the main entrance and kitchen on East end while the Old Lodge Hall would be a library and museum.   In 1956, the road to the Lodge was paved. 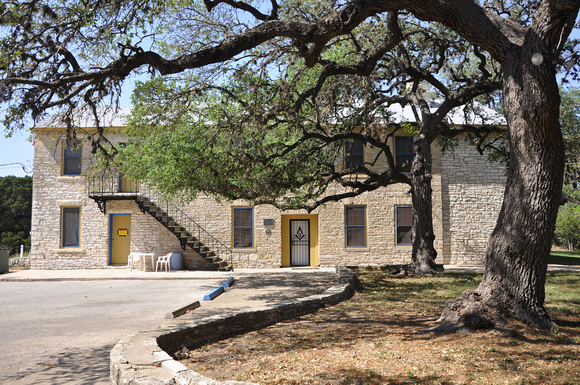 In 1961 a Secretary’s office upstairs and a study room downstairs were added in what is called the northeast stone addition.  Again, the Brothers did the work and kept the cost at $3,100.
In 1962  the interior staircase was reconfigured in the form of a Fellowcraft Staircase. In 1966 new chairs for the stations were built and dedicated to the men who had built the New Stone Lodge. In 1969, bookcases were built in the old windows of Old Lodge Room and Old School Room.

A Historical Medallion for the Lodge was granted in 1963. The Austin Bicentennial Commission named Onion Creek for a Bicentennial Heritage Award and the City of Austin granted AH Historic zoning in 1976, which means the building cannot be removed by any government entity and we are to keep the exterior in its historic configuration.  In 1970 a carport was added to the back or North side of the Lodge for outdoor cooking and barbecues and picnics. 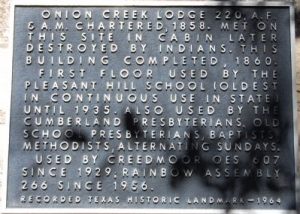 In May of 1975, bathrooms were moved downstairs and waterlines were upgraded.  In June of 1977, a new air conditioner and heater units were installed at a cost of  $4,100 .   In July of 1979, the lodge brothers remodeled and moved the kitchen to the West end of Dining Hall.  In 1994 an Historical Plaque was dedicated.  The Lodge roofs had caused many troubles and costly outlays over the years and, in 1982, they were reconfigured at angles and a sturdy metal roof was installed for a cost of $5,360.  The next year the eaves were boxed in and repainted.

The Old Lodge Room and the Old School Room were restored and organized to reflect the early days of the Lodge and as living museums.  In 1983 Brothers installed fluorescent lights.   The lodge theater seats were upholstered in 1987.   A major burglary in 1984 led to revamping of doors and windows (some were rocked in) and the installation of burglar bars and stronger doors and locks.  in 1994, the Lodge was repainted, re-carpeted, walls resurfaced, and curtains cleaned.

In 2003, the Lodge purchased and installed a new safe elevator (just over $8,000) which replaced the creaky historic elevator purchased from the old drugstore in Buda in 1968. In 2004 the wood trim of the Lodge was painted.  In 2005 a stainless double sink and faucets were installed in the kitchen.   The grand total of costs for buildings and improvements at Onion Creek over the 150 years of Brotherhood come to just under $50,000.   This number does NOT take into account the great number of hours the Brothers have labored to build and to beautify the building, making it a place reflective of the strong sense of Brotherhood evident to the community over the years.

This Labor has strengthened the ties of Brotherhood tremendously in the past and should continue to do so into the future.  Onion Creek Brothers are rightly proud of this “little country lodge” now in the process of being surrounded by a large city. 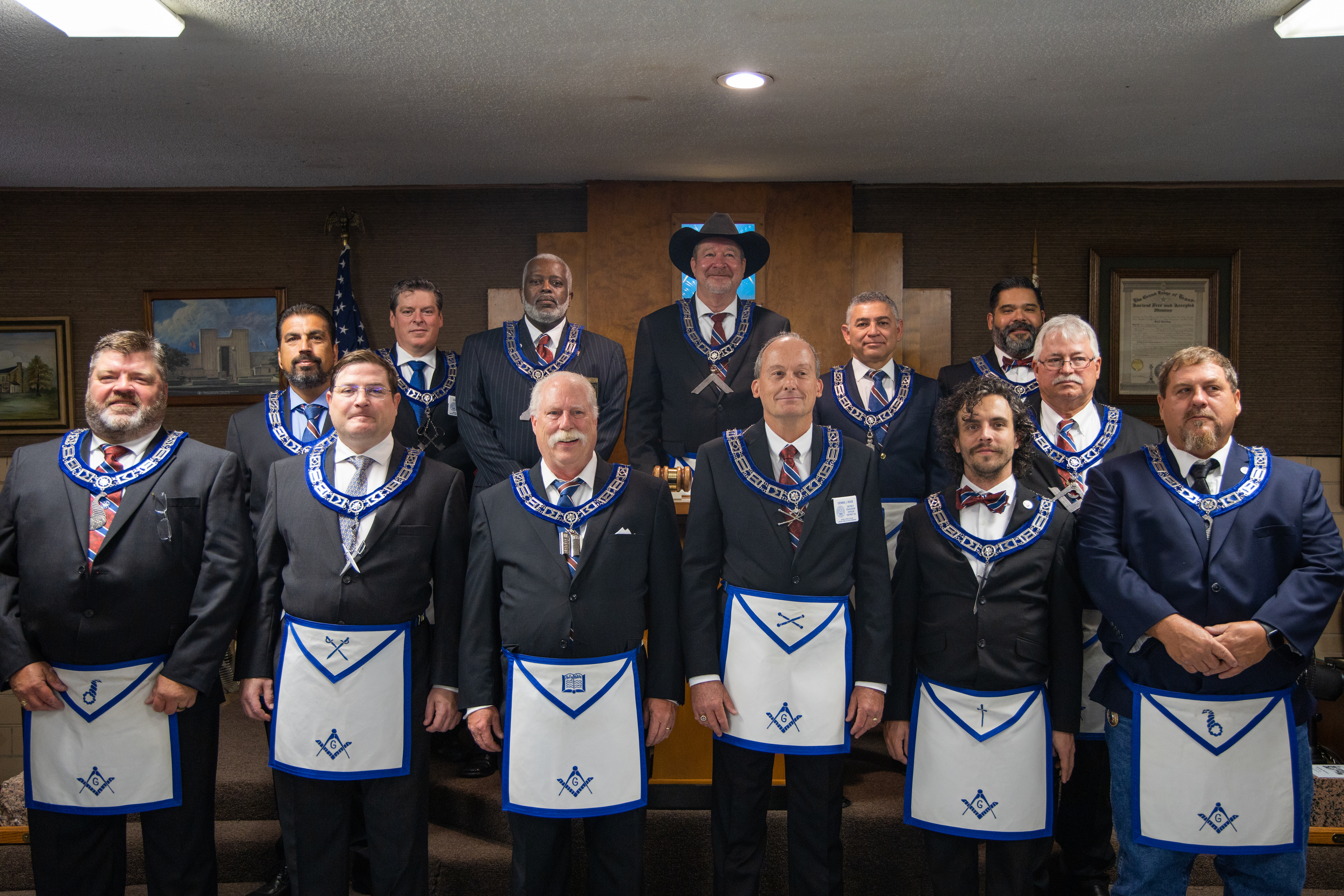 The City of Austin and Travis County have lifted all COVID-19 emergency rules and orders, effective immediately.

The decision to continue wearing a mask should be respected as public health officials still encourage wearing masks indoors for individuals who are high risk or provide care for someone who is high risk.